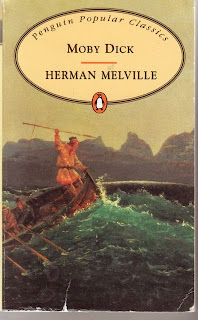 ” I, Ishmael, was  one of that crew; my shouts had gone up with the rest;  my oath had been welded with theirs; and stronger I shouted, and more did I hammer and clinch my oath, because of the dread in my soul. A wild mystical sympathetical feeling was in me; Ahabs quenchless  (osläckliga) feud (fejd) seemed mine. With greedy ears I learned the history of that murderous monster again whom I and the others had taken our oaths of violence and revenge”

The Whiteness of the whale

What is it that in the Albino man  so peculiatry repels and often shocks the eye, as sometimes he is loathed by his own kith and kin! It is that whiteness which invests him, a thing expressed by the name he bears. The Albino is as well made as other men – has no substantive deformity-and yet this mere aspect of all-pervading whiteness makes him more strangely hideous than the ugliest abortion. Why should this be so?

EX  Nor, in quite other aspects, does Nature in her least palpable but not the less malicious agencies, fail to enlist among her forces this crowning attribute of the terrible. from its snowy aspect, the gauntleted ghost of the Southern Seas has been denominated the White Sqall (skrikhals) Nor, in some historic instances, has the art of human malice omitted so potent an auxiliary. How wildly it heightens the effect of that passage in Froissart, when masked in the snowy symbol of their faction, the desperate  White Hoods of the Ghent murder their bailiff in the marketplace. 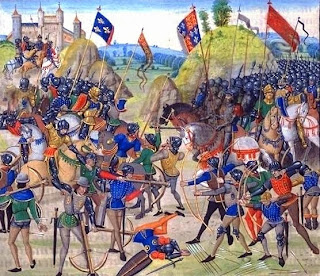 Jean Froissart (c. 1337 – c. 1405), often referred to in English as John Froissart, was a medieval French chronicle writer. For centuries, Froissart’s Chronicles have been recognized as the chief expression of the chivalric revival of the 14th century Kingdom of England and France. His history is also an important source for the first half of the Hundred Years’ War.

”THE WHITE HOODS MURDER THE BAILIFF OF GHENT IN THE MIDST OF THE MARKET.  ”

And of all these things the Albino Whale was the symbol